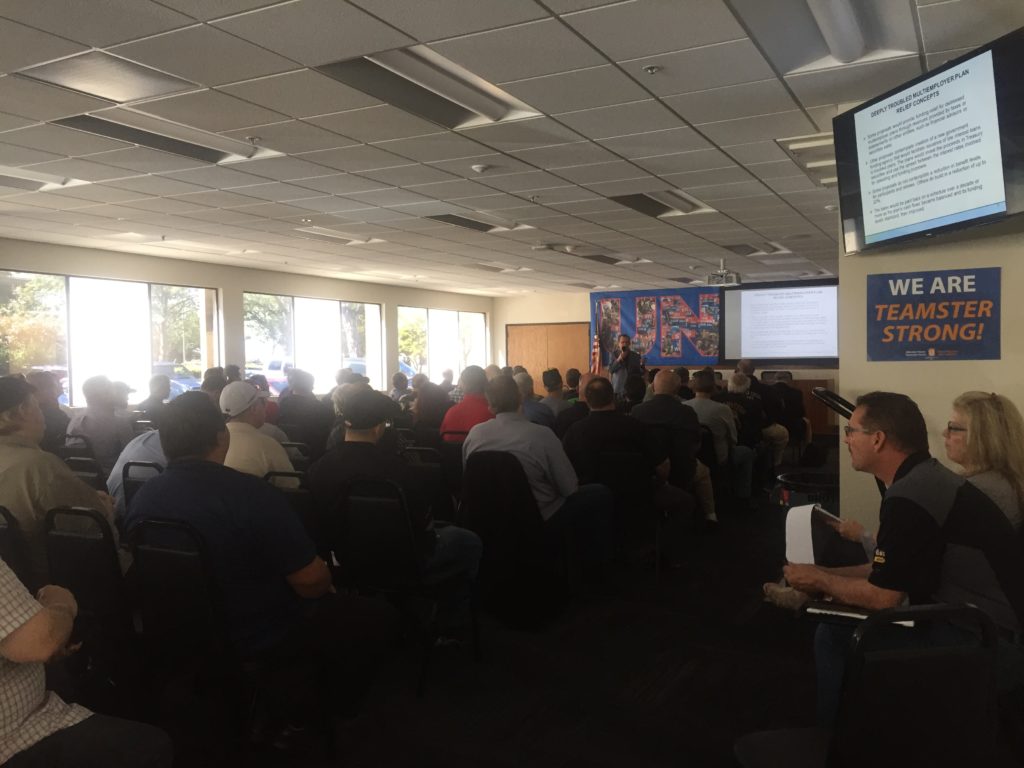 Western Conference Teamster (WCT) Co-Chair Chuck Mack held a very important meeting for all Local Unions from Joint Council 7 to share their updates on Teamsters’ pensions protected under the Western Conference of Teamsters Pensions (WCTP) Trust. Mack covered why the newly introduced Give Retirement Options to Workers (GROW) Act is a poor competitor to the Teamsters-backed Butch-Lewis Act, acknowledged the current and healthy state of the Western Teamsters’ pension plans, and how all Teamsters can actively participate to effectively oppose the GROW Act.

The Butch-Lewis Act, bi-partisan supported legislation which would offer effective solutions to the pension crisis affecting central states, has been challenged by an employer-friendly bill known as the GROW Act. The GROW Act is a composite pension plan, allowing parties to stop their current plan (Legacy plan) and invent a new replacement plan (composite). Composite plans mean no withdrawal liability and no Pension Benefit Guaranty Corporation (PBGC) premiums. The premiums are paid to PBGC by WCT and other leading pensions in the nation as insurance for when plans go under, and benefits are paid out to the worker.

How would the GROW Act affect my pension with the WCT? GROW requires a 120% minimum of projected funding growth in order for the plan to move forward. In other words, the plan must be in the green zone (a.k.a. in good, healthy shape) in order for it to be protected by this act. If a worker is employed by a small business that shows some struggle, ranking in yellow or red zones, that employer’s workers and its retirees are cut from benefits. And as a result of excusing employers in yellow or red zones, the GROW Act allows a reduction in participant contributions to the plan.

Why We Must Protect Our Pension:

Engage your members!  We have downloadable petitions here to be mailed back to the address on the form at the very bottom

Call, e-mail, or write a letter to your Legislator!

The International Brotherhood of Teamsters plan on working towards helping and endorsing solutions that will help pensions in the central states and is calling on all Teamsters to actively show opposition to the GROW Act. The WCT is currently touring to all Joint Councils under the WCTP to conduct important meetings in order to reach out to all Locals.